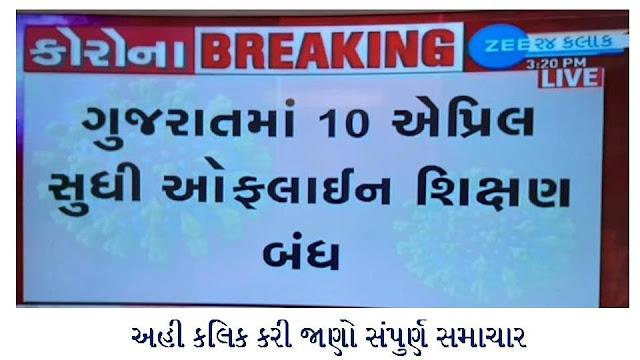 Decision to close off-line education until April 10
College examinations starting from tomorrow will be postponed
The state government today took one more decision to curb the rising corona infection in the state. The government has decided to stop offline education in schools and colleges. As a result, offline education in schools and colleges will be closed till April 10. Thus now all standard students will be taught online. The decision was taken at a meeting of the core committee.
In addition, college and university examinations starting tomorrow have also been postponed till April 10.
Discussions to prevent the transition to Corona were held at a cabinet meeting on Wednesday. There was talk of closing schools and colleges that started a month ago.
Read Gujarati News Click here
Offline education began in January and Feb.
Earlier, standard 10 and 12 schools were opened from January 11. This was followed by Class 10 and 12, PG and last year’s college classes. Then in the state std. Schools 9 and 11 were started on 1 February. As well as standard 9 to 12 and competitive examination classes. After the reopening of schools and colleges from 9 to 12, the state government’s education department announced the resumption of classroom education for first-year students in colleges from February 8.
Administrators also wanted to close schools
In primary school where children study together and have fun together, there is a growing fear among parents that if one of them shows symptoms of corona, the other may also be infected. But now less than 30 per cent students come to school, while others are taking online education at home.
Children are taking exams at home rather than at school
At present, examinations for students of Std. 3 to 8 are going on, but most of the children are taking the exams at home instead of coming to school. Even parents are afraid to send their children to school because of the situation; The board exams are starting from May 4, so some rules have been made by the education department to keep the students away from the transition to corona. If at the time of board examination of standard 10 and 12, if any student finds fever, cold, cough and temperature high, that student will be kept in a separate room, so that there is no danger of transition in any other student. However, in view of the current situation, some new rules may be implemented by the Board of Education at the time of examination.
Night curfew will be in force in 4 metros till March 31
The night curfew imposed in four metros of the state – Ahmedabad, Surat, Rajkot and Vadodara – has expired. A meeting of the government’s core committee has decided on a night curfew based on Corona’s condition. In which a night curfew has now been decided from 10 pm to 6 am. This system of night curfew will be in force till March 31, 2021. The state government has decided to maintain the previous system of night curfew in these four metros till Tuesday, March 16, i.e. from 12 pm to 6 am.