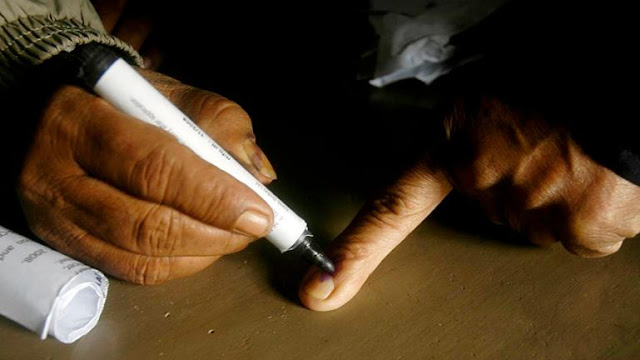 -Elections to six municipal corporations in Gujarat were conducted in a peaceful manner amid tight security and adherence to COVID-19 norms on Sunday, in which average voter turnout of around 42 per cent was recorded.
-Polling for a total of 144 wards across six civic bodies- Ahmedabad, Surat, Rajkot, Vadodara, Bhavnagar and Jamnagar- was held.
-In a video message after the conclusion of the election, State Election Commissioner Sanjay Prasad said that voting was largely peaceful.
– “Voting concluded peacefully. There was no news of any major untoward incident, and people voted in a peaceful manner. For this, I express my thanks to the voters, political parties, and administrative and police staff involved in election duty,” he said.
-In these polls, the main contest was between the BJP, which has ruled the six corporations for the last several terms, and the main opposition Congress.
-The Aam Aadmi Party (AAP) had earlier claimed that it would be an effective alternative to the BJP and Congress, while Asaduddin Owaisi’s All India Majlis-e-Ittehadul Muslimeen (AIMIM) is making its debut in the local bodies polls in the state as it fielded 21 candidates in six wards of Ahmedabad.
– A total of 2,276 candidates were in the fray in these six civic bodies.
– The partywise candidates were as follows: 577 from the BJP, 566 from the Congress, 470 from the AAP, 91 from the NCP, 353 from other parties and 228 Independents
An average 46.1 per cent voter turnout was recorded in the elections to six municipal corporations in Gujarat, officials said on Monday. Polling was held from 7 am to 6 pm on Sunday for a total of 144 wards across six civic bodies – Ahmedabad, Surat, Rajkot, Vadodara, Bhavnagar and Jamnagar.
Voting for the by-election (By Election 2020) was held on November 3 in eight assembly seats in Gujarat on Tuesday. For the first time in the Coronavirus, voting was held with this mask and social distance. The fate of a total of 81 candidates, including BJP-Congress in eight seats, has been sealed in the EVM. Along with the results of the Bihar Assembly elections, i.e. on November 10, the results of the Gujarat by-elections will also come on Tuesday.
Ahmedabad recorded the lowest turnout of 42.51 per cent, while Jamnagar saw the highest turnout of 53.38 per cent, followed by 50.72 per cent in Rajkot, 49.46 per cent in Bhavnagar, 47.84 per cent in Vadodara and 47.14 per cent in Surat. Of the total 1.14 crore voters registered in these major cities of Gujarat, 52.83 lakh had cast their ballots, the SEC said in a release.
VTV NEWS Live News
TV9 Gujarat News
ABP Ashmita Live news
ZEE 24/7 Live news
By-elections were held between Ahmedabad, Surat, Vadodara, Rajkot, Bhavnagar and Jamnagar constituencies.
By-elections were held on 21 February in Municipal Corporation.
By-elections were held on February 21 in eight assembly constituencies in Ahmedabad, Surat, Vadodara, Rajkot, Bhavnagar and Jamnagar will elect new governing bodies on Sunday. Municipal corporation elections are conducted by the State Election Commission every five years.