Jobs ,Naukarione Updates, Good News, Ojas Jobs, Ojas Gujarat
Naukarione
Gujarat-Budget-live
The Gujarat government on Thursday informed the legislative Assembly that the state’s public debt has risen by over Rs 28,000 crore in one year and now stands at Rs 2.4 trn. 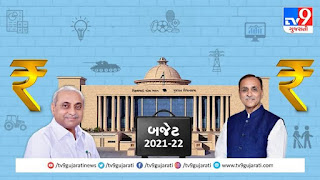 Responding to a written query raised by Congress MLA Shailesh Parmar during the Question Hour, Deputy Chief Minister and Finance Minister Nitin Patel said as on December 31 2019, Gujarat owes Rs 2,40,652 crore, a rise of Rs 28,061 crore from 2018-19.
On Wednesday, Patel had presented a Rs 2,17,287 crore state budget for 2020-21, with healthy allocations to education, health and agriculture sectors.
In a written reply to a sub-question about interest paid on loans taken in the last two years, Patel said in 2017 -18, the state had paid Rs 17,146 crore interest and Rs 13,700 crore as principal amount.
In 2018-19, the government had paid Rs 18,124 crore in interest and Rs 15,440 crore as principal, he added.
The present debt comprises a market loan of Rs 1,79,353 crore, while Rs 14,691 crore were borrowed from financial institutions, Rs 39,385 crore from National Small Savings Fund and Rs 7,223 crore in Central debt.
As part of the initiative to broadcast the proceedings of the Assembly live, it has been decided to make the budget speech live through the mobile app in the first phase. The application has been prepared with the approval of Chief Minister Vijay Rupani and Assembly Speaker Rajendra Trivedi.

SANDESH NEWS લાઇવ અહિંથી જુઓ
Gujarat Budget Live: Click here
finance minister Nitin Patel on Tuesday presented the state’s modified budget for the year 2019-20, with an overall surplus id Rs 572 crore. In a first, Patel also presented a budget size of Rs 2.04 trillion for the year 2019-20. “This is a historical moment for the State as first time since the formation of the State, a budget size of over Rs two lakh crore (Rs two trillion) is being presented in this house,” said Patel while presenting his seventh budget. The modified budget has estimated revenue receipts of Rs 1.54 trillion, with a revenue expenditure of Rs…..