Jobs ,Naukarione Updates, Good News, Ojas Jobs, Ojas Gujarat
Naukarione
apps, Government Service, Land
Ever since learning about human farming, questions about farming land have arisen. These questions were sometimes simple, sometimes confused, sometimes resolved, disposed of panchas, democratically demolished like Janapad. Occasionally powerful people became kings and conquered land and became their owners. The people began to participate in the production of land in exchange for cultivation. Revenue farmer paid the rent, as some people bought land and let others cultivate it. This system continued for years, with no standards on how much to contribute or how much to pay for revenue.
The farmers who used to grow crops in the land worked hard and the landowners used to get a share of the land from the produce, in addition to giving land revenue to these farmers or to the farmers. 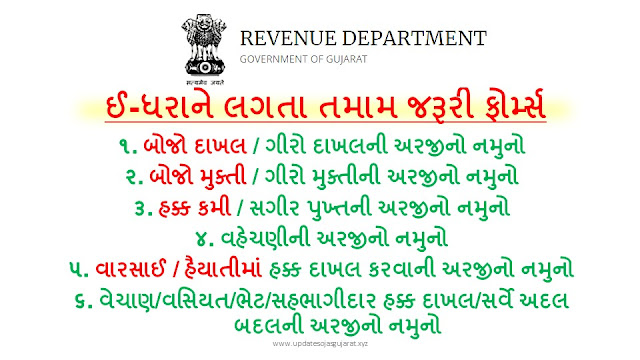 When the crop was ready, it was brought to Khilawad where all the parts were separated. The revenue of the State, the share of the landowner, was calculated, and the other village Chakriyatas, who used to give the farmers an annual share of five or ten shares of grain, were also paid from here.
In such a distribution, the revenue was more likely to be stolen. Also, it is difficult to get the grains collected. Therefore, it was decided to take cash as revenue instead of janasi or yield. The yield varies depending on the year. If the yield was 100% or sixteen it was decided by the amount of revenue per acre. The revenue was calculated according to yield, standard, or moksadar according to the income tax, excused or deferred. The main income of the states was only land revenue. Thus, full attention was paid to the measurement, assessment, inspection, collection and collection of land. So that the state gets maximum revenue.
The state was the revenue collector on land and the landholder was the revenue giver. But the land-holders pay revenue to the farmers by letting them cultivate the land. Alternatively, the government was exempt from the reward of the landowners. There were seven such rewards, which were abolished after independence.
Under the Land Revenue Act, the Government has the power to make rules in section 1 (1). Land Revenue Rule-1 is implemented in Gujarat. The new rules made by the old Anderson – Bombay Land Revenue Rules – 1 have come into force with effect from 1/3/8. The rules contain 3 (Bawan) administrative orders and 3 notes or notes have been placed.
↙️All document is here Download
Even though the amended law of the law was implemented in 8 years, it was protected before any tenant who had been cultivating the land for six years. In 8, the law of preventing and consolidating the division of agricultural land came into being. The law is still in force. This Act came into force in the Gujarat area. The law of 3 came into force with the amendment, which resulted in the purchase of multiplicative land from 3-5-4.
Gujarat Agricultural Land Top Limitation Act came into force in the sixth. The top area was decided in the state of Gujarat. This law was amended to reduce the top sector by 1. Simultaneously, some of the lands which were exempted were canceled, such as the lands of Cavid, which were considered as cultivated land in the 5th. Meanwhile, in Gujarat and Saurashtra, numerous awards and laws of land belonging to different powers were implemented and all kinds of prizes were abolished.
References Books:
Revenue Inspection Commissioner (RIC) & Ex-Officio Secretary
Revenue Inspection Commissioner is the Head of the Department. In addition, he is ex-officio Secretary by virtue of his office. Inspection of offices of Revenue and Panchayat relating to Revenue Work of the State is being carried out by RIC as per prescribed programme. The Commissioner carries out monthly review of revenue work of the Collector. Moreover, review work is being carried out by convening zonal meeting of Collectors. After dispatch of inspection notes to the respective offices for compliance, Memo reading is done and instructions are issued for rectification of deficiencies. In order to ensure that revenue work is carried out as per rules and laws, special revenue training is imparted to revenue officers/ employees. This includes implementation of various important Acts. In order to enhance efficiency of officers of revenue work, conference of Mamlatdars, Prant Officers and Collectors is convened periodically.